Resilience is a statement. A statement of supporting women, supporting artists and supporting the community. Resilience will examine the complexity and strength of the human condition in the face of adversity – and how it prevails. Experiencing the multifarious layers of stamina and understanding, each work and engagement examines the different ways in which women have overcome obstacles and societal oppression. The artists in this exhibition are Kilkenny artist Breda Lynch, feminist artist Sarah Browne and a special artistic collaboration with Amber Women’s Refuge which will be unveiled on the opening night.

The exhibition will be launched by Mayor of Kilkenny David Fitzgerald with speeches from Kilkenny Arts Officer Mary Butler and Siobhan McQuillan from Amber Women’s Refuge.

Additional strands to the Resilience educational programme include;

1. 23 September – 22 October: Additional exhibition at The Window Gallery at John’s Green House, Kilkenny. An exhibition of community members working with the Irish Refugee Council and One Million Stars Ireland with Amber Women’s Refuge educational materials. There will be a qr code on the window to donate to the refuge also.

2. 23rd September: Audio tour, online. There will be an audio tour available on this page from the 23rd of September.

4. 24th September 11 – 12 pm: Tactile tour at Unit 28, MacDonagh Junction, Hebron Rd, Highhays, Kilkenny. This is a special tour using non visual elements to discover the art works in the exhibition in conjunction with the NCBI.

5. October 16th 12 – 1pm: A talk by Survivors of Symphysiotomy at The Watergate Theatre, Kilkenny. SOS, or Survivors of Symphysiotomy, is an Irish membership group consisting of survivors of the symphysiotomy surgery and families of those who have undergone the procedure. The unfunded organisation campaigns for justice to those who have suffered from the surgical procedure which they needlessly endured. A talk on the groups work will be delivered by Chair Marie O’Connor.

Sarah Browne is an artist based in Ireland concerned with spoken and unspoken, bodily experiences of knowledge, labour and justice. Her practice involves sculpture, film, performance and public projects, often in collaboration with others. Recent solo projects include Echo’s Bones (2022: a collaborative film-making project with autistic young people in North Dublin,responding to the work of Samuel Beckett); Public feeling (2019: public art commission in South Dublin leisure centres); Report to an Academy, Marabouparken,Stockholm (2017), Hand to Mouth at CCA Derry~Londonderry & Institute of Modern Art, Brisbane, and The Invisible Limb, basis, Frankfurt (both 2014). In 2020 she curated TULCA Festival of Visual Arts, Galway, with a project titled The Law is a White Dog. Significant group exhibitions Browne has participated in include Bergen Assembly: Actually, the Dead are Not Dead (2019) and the Liverpool Biennial, with Jesse Jones (2016). In 2009 Sarah Browne co-represented Ireland at the 53rd Venice Biennale with Gareth Kennedy and Kennedy Browne, their shared collaborative practice. She is associate artist with University College Dublin College of Social Sciences and Law. Visit her website here

The Invisible Limb is the third in a series of works that address issues of gendered labour and representation (with Peripherals and Something from nothing). This latest film is partly addressed to deceased Frankfurt artist Charlotte Posenenske, renowned both for her rigorous artistic oeuvre and her eventual cessation of art production in favour of practicing sociology, focusing on the study of wage labour conditions and factory processes. The film features another sculptor of Posenenske’s generation, born in the same year in fact; Irish stonecarver Cynthia Moran,with an entirely different political and artistic trajectory. Shot partly on location at the Giant’s Causeway, Co. Antrim, the film stages a series of unlikely correspondences through sculptural objects and ideas of mimesis, technology and the magic of apparently costless production.

Breda Lynch – born in Kilkenny and lives in Limerick city where she works as a full-time lecturer in Fine Art at Limerick School of Art and Design. She holds a BA (Hons) Degree in Fine Art Print at Crawford College of Art, an MA in Fine Art from Chelsea College of Art and Design, London and an MPhil in Fine Art Print and Digital Media from the University of Wolverhampton. A visual artist working in a variety of media, including drawing, photography, print and digital media, video and installation. She engages with dialogues and discourses on – queer feminisms, the western mystery tradition and occulture, appropriation and the economy of the image. Lynch has exhibited extensively in solo and group exhibitions in Ireland and abroad. A recipient of several awards and residencies, Lynch is included in national and private collections. Her work was recently purchased by IMMA – Irish Museum of Modern Art and the Arts Council of Ireland for their permanent collections. Visit her website here.

This cyanotype/digital print titled – ”WITCH” (2019) is part of the larger body of work titled ‘Fragments of a Lost Civilisation’ (2016 ongoing). It is derived from an appropriated image foraged from online that details W.I.T.C.H. (Women’s International Terrorist Conspiracy from Hell) an activist group originally from the US that uses the figure of the witch to establish a collective identity as a social movement by using the theoretical framework of identity work. 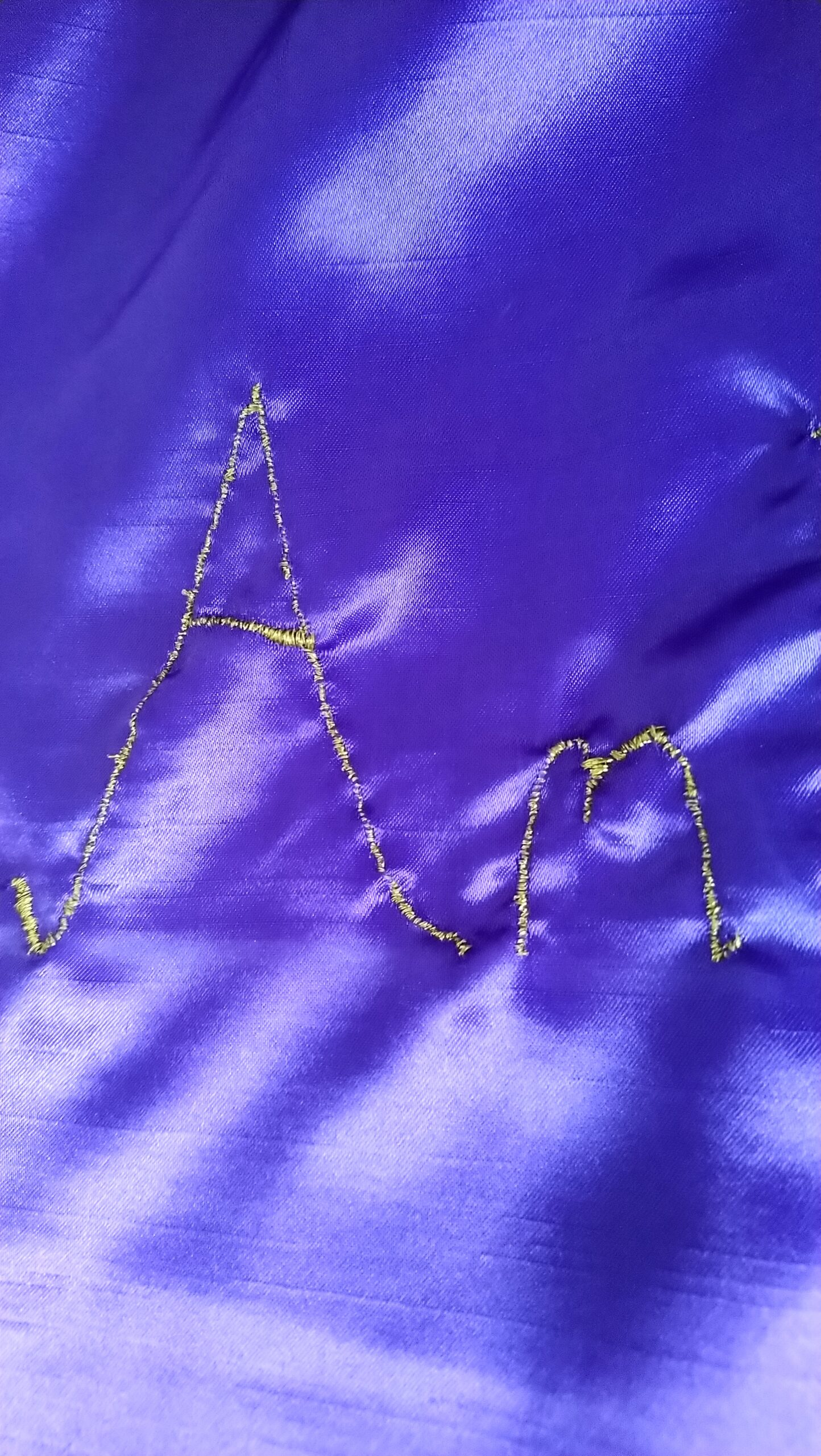 Amber, is a long established organisation working to empower women and children of all cultures and backgrounds to live abuse-free lives. As a specialist domestic abuse service our professional team works alongside others to safeguard women and children against domestic abuse, including coercive control. We provide safe, supportive, client centered services, from early intervention to recovery, both in the community and at the refuge. Visit their website here.

Amber Women’s Refuge – Supporting Local Women and Children for 20 years (2022) is a specially commissioned textile wall hanging to mark twenty years of Amber Women’s Refuge and was made lovingly in honour of it’s service users. Made by Amber Women’s Refuge staff and local women who are allies to the refuge; this work is one of the collaborations between the Emerging Curator Development Programme and Amber as our charity partner for the year. The wall hanging has a palette of purple to symbolise anti-violence against women and silver to represent resilience throughout. Each patch on the piece represents a different symbol of hope and strength and the special eight pointed star from Amber’s One Million Stars project is central to the piece.* The artists are: Lead Artist Siobhan McQuillan, Ita Crowley, Jess Van Valkengoed, Connie Jordan and Stella Coughlan, with additional making by Sinéad Keogh and support from Ginan Abbas.

*Amber’s One Million Stars Ireland project is an inclusive community arts project connecting communities across Ireland in solidarity against domestic abuse and all forms of violence. Find more information here.

SOS, or Survivors of Symphysiotomy, is an Irish membership group consisting of survivors of the symphysiotomy surgery and families of those who have undergone the procedure. The unfunded organisation campaigns for justice to those who have suffered from the surgical procedure which they needlessly endured. Once hygiene, clinical practices, and the improvement of the caesarean section technique improved in the 1900s, the symphysiotomy procedure was largely abandoned in the developed world, with Ireland being the most famous exception. It has been found that the Catholic Church insisted on the procedure to ensure childbearing without limitation during a time when artificial contraceptives were banned, and non-Catholic doctors recommended sterilisation after three caesarean sections. Matilda and Bernadette Behan established survivors of Symphysiotomy in 2002. From 2008 to 2014, many appeals to the Irish Ministers of Health were made, as were some reports into the consequences of symphysiotomy and malpractice, but ultimately, SOS was forced to make a complaint to the United Nations Committee Against Torture due to Ireland’s failure to properly investigate the practice. Four months after the complaint, the Irish government was instructed to investigate the issue by the UN Committee on Human Rights. In 2016, the Irish government awarded payments amounting to €34 million to those aggrieved, but spokesperson Marie O’Connor claims that it’s yet another official whitewash report of the issue.

A dedicated page will be on this website to track the groups history.

A short history of the Kilkenny Women’s Group as told by one of it’s founding members Mary O’ Hanrahan.

In the early to mid 80’s Mary had become aware of what was happening in the women’s movement both nationally and internationally. At the time Mary had five sons. She wanted to meet with like minded people in Kilkenny and so the women’s group was established from a mutual desire from Kilkenny women to come together and acknowledge the experience and talent of women in the home. At the time, society had seen women’s place to be in the home looking after children and were not encouraged to develop or had the same privileges as men. Kilkenny Women’s Group went to visit women working in the home place to talk, to act as a support system and to identify the needs of their peers. A mission statement was drafted communally and so began a series of incentives, workshops, lobbying politicians, gatherings and actions taken to improve the lives of women. Two groups were established in this support mechanism; a group to support women in the home and a group supported by ANEB (Adult National Education Body) to provide classes in History, English Literature and Sociology. Martin O’ Grady, the then Education Officer was very supportive in securing funding for this venture. Courses were on offer of the low cost of around £15 and if the women could not afford this cost the classes were subsidised. In addition to this there were free creche facilities set up to support women who were receiving this education. It was an exciting time for local women. The group were members of the Council for the Status of Women which later became the National Women’s Council of Ireland. Mary was a board member of the council for a period also. Mary and the Kilkenny Women’s Group conducted research with the support of Gerard O’Neill of Amárach for five months working with women in the home. This report was launched by president Mary Robinson in 1994. The Kilkenny Women’s Group was the first group to celebrate International Women’s Day in Kilkenny. Over the years they had conferences with political speakers, poets, panels with people and groups from across the county in attendance. One of the key objectives in the Kilkenny Women’s Group is to support one another in their talents and leadership skills. This motivation is evident in women from the group going on to help establish Amber Women’s Refuge, the Kilkenny Age Friendly Council and the Rape Crisis Centre. Women did all of this work both for themselves and for each other.

Mary say’s “ I am just one of the women involved, every woman contributed something”.

Today the Kilkenny Women’s Group meets weekly to support, encourage and celebrate each others lives. Mary notes that there is still a lot of work to be done.

You can find the full catalogue here.

Kilkenny County Council Arts Office has run the fabulous Knitted Together project across 2020, 2021 &

Knitted Together Get-together for Culture Night

Join the Knitted Together team in our marquee on The Parade from 4.30pm to 8pm on